Today has been the usual early start. The little dark star crawled in with us at about 2am which seems to be the new normal. She’s an average sized 3year old and we have a standard double bed so it gets a bit squishy but we don’t mind. She won’t be little long and as uncomfortable as it is sleeping next to a small person that seems to curl up yet take up all the bed I love looking at her when she’s sleeping, those dark lashes and rosy cheeks, soft moth breaths on my face, just perfect and only ours for a limited time.

I mentioned before I was knitting a toy for her. Well today after spending the morning giving Sallyvan a really good scrub to get her all ready for our planned august shennanighans I sat and finished the toy. I’m not a natural at knitting and I had a few false starts but here he is, the lovely Flop from Bing!

I know some parents really dislike the programme but we love it, Flops gentle manner and Bings portrayal of the average preschooler is lovely and we bring elements from the programme to our daily life when we talk about the time Bing made a mistake but put it right. I HATE passionately programmes that over moralise and patronise children but I don’t think Bing does that at all. I’m hoping Flop is going to be a useful parenting tool. The Little Dark Star often insists we spend the day in various ‘character’ and I really don’t mind being ‘Flop’ she responds well to direction from ‘him’ and hopefully she might put her shoes and coat on for Flop even if she won’t do it for me 😉 sneaky huh?

As you can see I muffed him up a bit. I somehow got my needle sizes wrong and despite thinking I’d sized down a mm I actually should have been a whole mm smaller than I actually used. His stuffing is clearly visible in the body but I had to stuff him sort of ‘medium firm’ to keep his neck stiff enough to support his head. The Little Dark Star seems to love him mistakes and all, and that’s what matters. 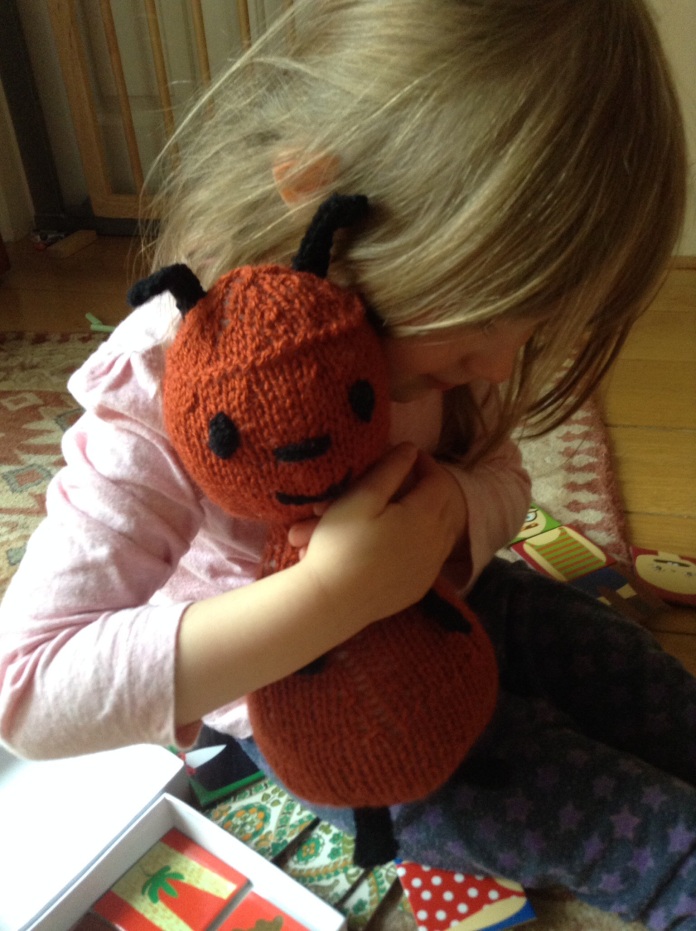 I have completed part 13 of Sophie’s Universe and am now making a start on the butterflies. I still have not decided what will happen to the Sophie when it’s finished. Maybe I will keep it, I think it depends on the final size.

Now Flop is complete I really should finish up the toddlers cable cardi I started months ago. I’m going to have to wing it without help as I don’t think we can have German Nan to stay for a while yet as life here is a bit topsy turvy due to breaking down walls for the new kitchen and a friend staying with us on and off with her two lively boys.

We have planned a bit of a busy august in our lovely Sallyvan. First we will be attending the Green Gathering. I’ve not been before and I fear I’m probably just not ‘green’ and hippy enough but that’s the point of going, to meet new people and learn stuff and come away with some knowledge that will help us be greener and kinder to our planet. After that we will travel onward to a campsite for a few days to wash our clothes and linens and give Sally a quick clean and tidy. Then we will be going to the Green Man festival for some more chilled out times before heading home again. The man of the yurt has fixed our LPG water heater in Sally so even though we will be off grid for both festivals I can have hot water for washing up and giving The Little Dark Star one of her Sallyvan ‘baths’ (my big green wash bucket on the floor of Sallyvans shower/loo).

Sallyvan is in pretty good condition for what would be affectionately known as an old ‘crappy’ on caravan forums but in the past she obviously had some kind of pelmet (oh how the 80s and 90s did love a pelmet!) which has since been ripped off. It’s left behind a really ugly strip with old glue.

﻿I’ve got some Drops cotton yarn that I made a tealight holder cover with on one of our trips away so I’m planning on making some bunting with that before we go away.

﻿ I’ve got a proper ‘thing’ about that sort of mustardy yellow and greens at the moment. The Drops cotton isn’t the best for crochet as its splitty and catchy when hooking but I’m going to give it a try because I think it will have a good shape and drape as bunting as well as washing well.

Hopefully I will get it done or at least nearing completion before we set out in August for our little festival trip. Now I’m off to water the tomatoes and stuff in the greenhouse and survey the overnight slug damage to the rest of the garden, the greedy slimy little horrors.

We spent the half term week in the Isle of Wight again, we love it there. We have always stayed in the west Wight area where its a bit ‘wild and wooly’ as my Dad says i.e. The weather can be quite windy due to the exposed location and we stay at a farm with a cliff top campsite. The views are lovely, here is a sunset looking across the campsite and edge of the cliff to the right. Not the best picture quality from the ipad but it was very lovely in reality.

﻿We had wonderful weather this time except for a couple of windy days. I was a little bit nervous as Sallyvans awning shuddered and shook and Sallyvan herself rocked about in the wind but it all held fast. It’s a new (but second hand) awning and aluminium rather than steel. We had to replace our old one urgently after the zip busted completely and we had high winds coming in on our last trip (we seem to pick these blowy places as our favorite sites!). The magic of the internet saved us and I sourced the awning we now have via Gumtree. Two hours post broken awning and a ‘new’ awning had been collected and was being fitted.

It’s quite a nice one I think, even if it isn’t as heavy duty as the old one. And it came with an optional ‘annex’ which our lovely Goldenhair teenager now has as her little room.

Between our two Sallyvan jaunts I’ve been trying hard to get on with some gardening. Things had fallen by the wayside out there the last two years due to the arrival of the Little Dark Star and her being not very low maintenance 😉

The man of the yurt made me a “squash arch” on a big bare patch of flower bed I still haven’t planted up. I have no idea if they are actually butternut squash in the grow bag because I got all my seedlings mixed up so they might be yellow or green courgettes or even cucumbers!

He also converted this pallet into a little herb planter for me. 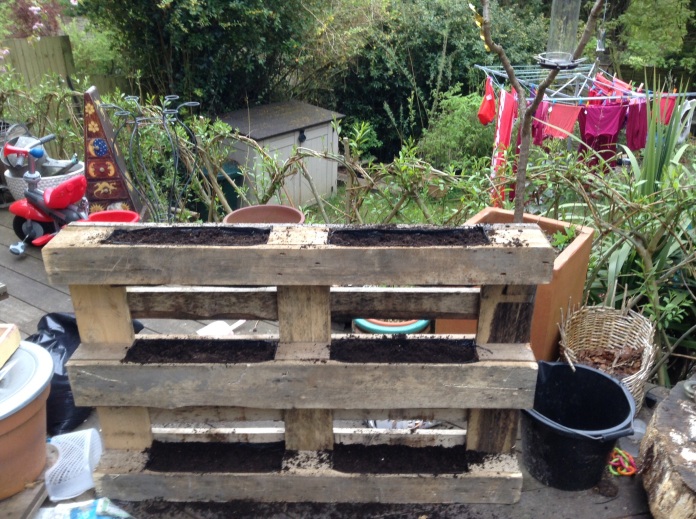 So far I’ve only got some garlic growing in there as my seedlings have failed to germinate. A lot of seedlings I’ve planted in the veg patch have not come up this year and I’m actually wondering if slugs are munching them at the first peep. Our garden is like slug paradise it seems and I wage continual ongoing war with them. I try and keep to enviromentally kind methods like sand and ‘slug stoppa’ gravel but this year I’d really had enough and I have used a couple of pellets and I feel really crappy about it. I’m so sick of spending months growing stuff in the greenhouse to have it reduced to completely nothing overnight the moment I plant it out. I’m hoping this little bit of protection means they can get big and sturdy enough to withstand a bit of munching when the pellets wear off and then I can just stop using them.

Anyway enough of the garden! 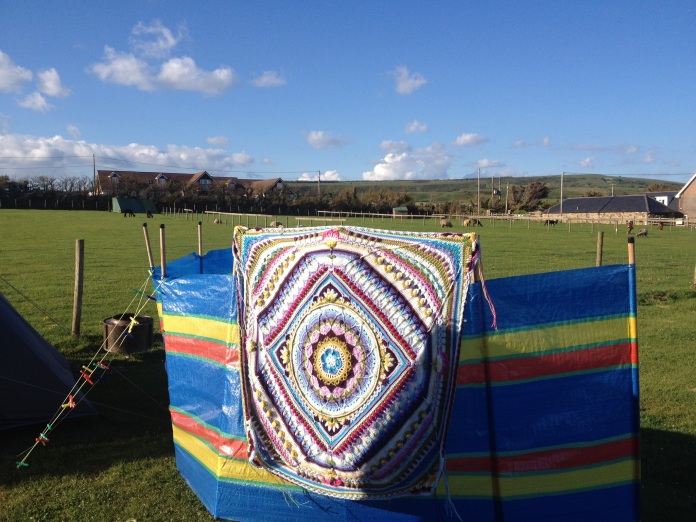 I wanted to take a few really pretty pictures but it was so windy Sophie was threatening to just take off and end up in the field with the sheep. I was also get some askance looks from fellow campers standing there trying to take a picture of a blanket!

I am actually really enjoying the repeat of the earlier part of the pattern with the big daisy corners and zig zag hills and I decided to keep the colours as close to the originals I’d chosen but as I’ve moved into the next parts I’ve had to substitute the pale pink with the bright pink because it didn’t look like I had enough of the light one to get all the way round. There’s no way I’m frogging anyhting at this point if it can be avoided with some foresight.

Here’s a picture of the lambs in the field next to our tent, just because well they are too cute aren’t they! 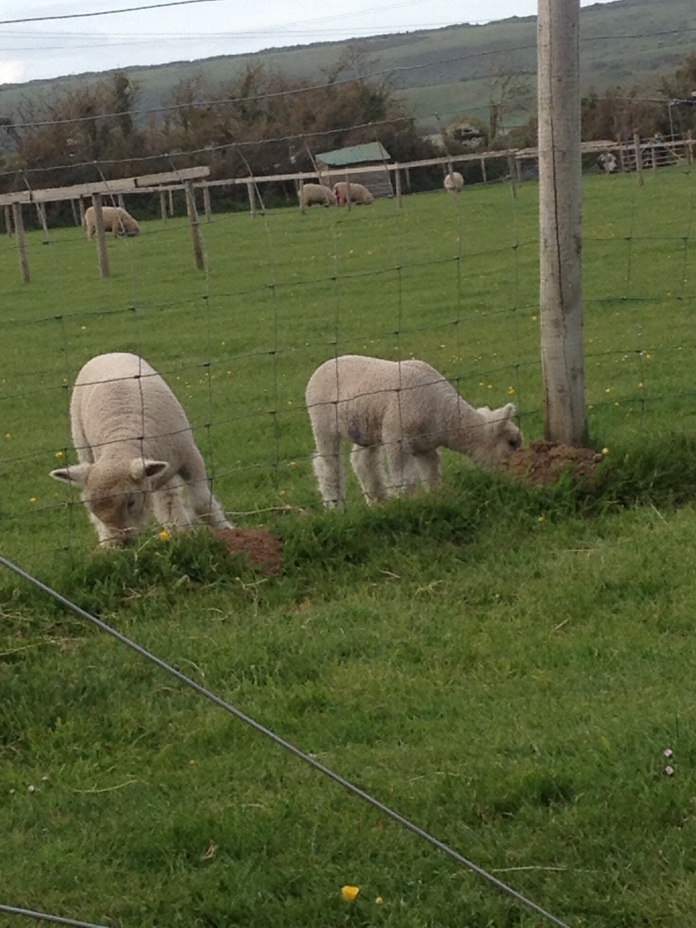 They are waiting to shear the adult females but two are still pregnant so they are having to delay. Apparently they only get paid £8 per sheep fleece. I’d always assumed its would be much more than that. Had to stop myself getting ‘ideas’ it’s actually a good job they didn’t shear them whilst we were there because I could see myself dragging one home to experiment with. ﻿They actually had the alpacas shaved whilst we were there. They went from being these big poofy captures to looking all gangly and slim. We went and visited the local alpaca farm too. I didn’t buy anything from the yarn barn as it felt too itchy for me unless I bought the really expensive stuff with silk and cotton blend. I’m stash busting and being very very restrained. I’ve vowed not to purchase anything no matter how fantastic a deal or beautiful it is until I’ve halved what I have here already. That’s going to take at least a year but I must control myself.

Yarn addiction is a thing. I know because I definitely have it! ﻿

Here’s a pic of the oldest two girls ‘putting their tent away’ on the last day of our holiday. It was quite breezy so they resorted to this. Makes me chuckle everytime I look at it. 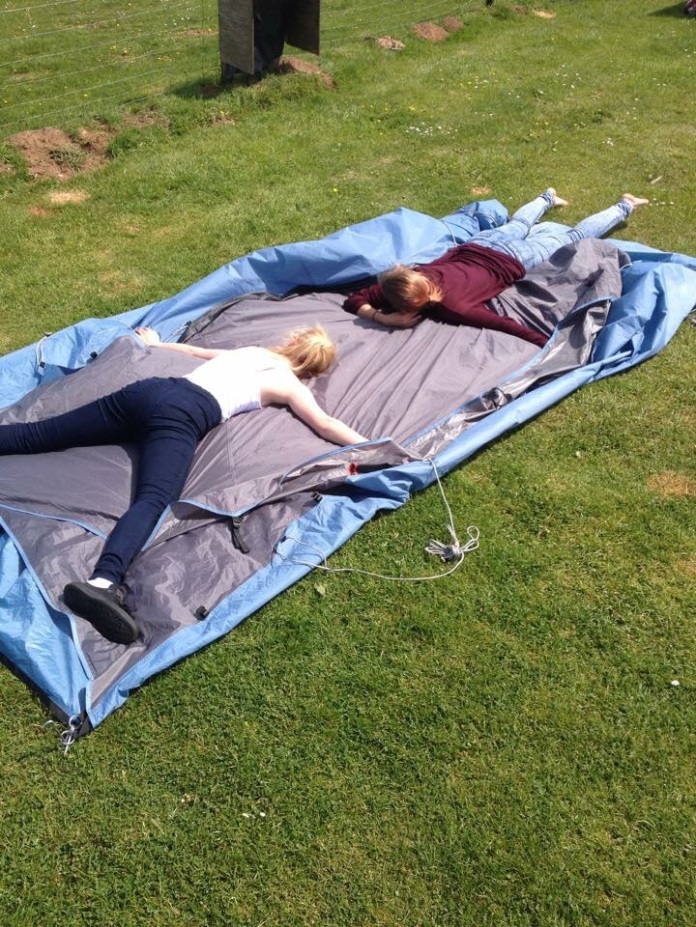 The little dark star is napping so I’m off to sneak in a little bit of time with one of the other projects I’m working on right now, a knitted of a character from a TV programme she loves. Hopefully it will turn out well and I can post about it next time.