I’ve taken a little break from my Big Knitting as I am unwell this week so I decided to do a little post about my visit toThe Handmade Fair at Hampton Court.

It was the man of the yurts idea I go and take a friend. I haven’t been out without the toddler since before christmas so naturally I jumped at the chance!

He booked us ‘Full Experience’ tickets that included three activities. A demonstration where Jo Colwill demonstrates how to make an heirloom quilt, one skill workshop creating sparkling baubles, and making Pom Poms for ‘World Pomination” a record breaking attempt for the most Pom Poms in a line.

We missed the Pom Pom thing as we didn’t set out till late and stopped for breakfast on the way. I wasn’t heart broken I know how to make Pom Poms in several different ways already. It was a standard brownies activity for little girls when I was young! 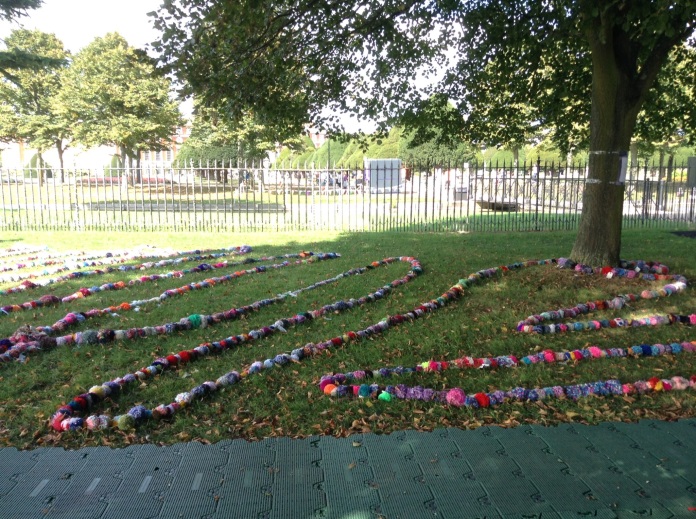 Yeah, then we missed all the other stuff too, whoopsie! We were only a fraction late for the bauble thing but people who hadn’t paid were free loading round the entrance and we couldn’t be bothered trying to sidle in late through that lot. I think we consoled ourselves with some very nice Sauvignon Blanc and sat and had a lovely chat with a couple of ladies who were on a break from working in one of the smaller marquees.

The fair had lots to offer but we got ourselves all wrapped up and overexcited with the two ‘shopping villages’ and we kept arriving at all the fab free classes just a little bit too late. Whoops again.

We particularly got enraptured by one of the very first shopping village stands we came to, Ingrid Wagner and her Big Knit and Big Crochet. You can check out Ingrid and her other brilliant projects here. The stand was already quite busy when we first arrived but was swamped by the time we left. She made time for everyone though and helped make sure people had the things they needed and knew what they were doing. 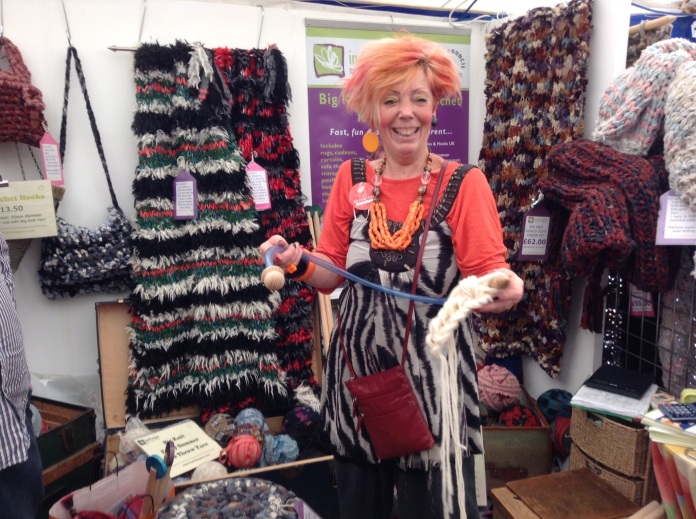 She had a bit of everything for people to try their hand at, Big knitting needles, big circular needles (two ends with a flexible pipe between them) and a HUGE crochet hook! My lovely friend bought a bag kit that includes the yarn, the hook and the pattern. You get to choose your own yarn from the big chests on the stand. I originally was going to get a big hook and some yarn and see where it lead me but in a moment of madness I couldn’t resist the giant knitting needles and summer throw kit. I actually can do simple knitting but I can’t really follow anything other than a basic pattern. My nan is all fancy stick work mixing shapes and colours to make lovely sweaters and stuff. If I attempted that it would just be a misshapen blob with holes where they shouldn’t be. The kit though is just stocking stitch and I can do that, hurrah!

I choose my colours and bought an extra ball of the main colour because I wanted to be able to make a throw a bit larger than the size on the kit. Ingrid kindly put our things by till later so we could continue shopping and crafting.

Those big knit needles are huge! The thin ones are for comparison and are quite long needles my nan gave me.

It was a bit crochet and crafts heaven, we saw lots of lovely yarns and met lots of lovely people and we got ourselves loads of inspiration. It was particularly lovely to see so many people making a business from their home grown enterprises. Oddly we couldn’t find a stall selling basic crochet supplies like hooks (apart from the giant ones) which seemed a missed opportunity as a lot of the small marquees had learn to crochet workshops going and one of the other skills demonstrated earlier in the day had no seller of the necessary supplies on site.

We were there till the stall holders were actually packing away and security was shooshing everyone off site. We popped back to Ingrid’s stall and picked up our things and got to have a lovely quiet chat with her. She’s very inspiring and passionate about her work. I’m quite excited to have been asked to help her with a little project she has in mind and I will be starting on that after I’ve finished my big knit summer throw.

We had such a lovely day, the sun shone all day, we drank prosecco and wine, munched cake and cheese and by the end our arms ached, our feet ached and our purses/cards ached too!

Definitely will return next year but we will plan our day by checking out all the workshops on offer first and deciding what we’d like to do, set alarms on our phones so we don’t get massively carried away chatting to people and shop in between.

My friend says she’s going back next year and running a stall. I admire her big dreams but I don’t feel I have the talent or organisation for that sort of thing really. I will be her assistant though 😉

Here is a quick photo of me at the start of my latest project, Big Knitting!

When I get an hours peace to prepare a proper post I shall tell you all about it. I just couldn’t keep my excitement in any longer so had to post something.

I am also working on this blanket

Yes its a bit pink! Really not my usual thing but I added in lots if purple shades too and I rather like it.

That’s all for now, it was just a quickie before I dive completely under my duvet for the night. It’s rather cold this evening.

I was tidying up the big wood sideboard we have in our living room as we have replaced it with one from my daughters bedroom and it needs to be rehomed.

It is seriously full of clutter. Mostly ancient clutter.

I was sorting the stuff into piles ‘rubbish’ ‘put away’ ‘charity shop’ ‘recycling’ and I ended up with a stack of obselete CDs from our old computer.

I was going to bin them at first but then I remembered how I had made a room mobile from some CDs years ago so they might have a use. I didn’t fancy making a replica mobile but thought I should probably keep them to use for arts and crafts with The Little Dark Star. I remembered some people use them in the garden, apparently they are good for hanging in your veg patch to keep some animals away from it. As I visualised them twirling out there in the sunshine I suddenly thought "oooooooh they'd look cute in the window or the tree with crochet on them!"

Seeing as I'm enjoying a little love affair with mandalas right now it seemed like the perfect idea.

I used my own pattern for the little mandala. One mandala for each side and two CDs back to back inside them. They look lovely when the sun catches them.

Whilst I’ve been merrily making those our clever Golden Haired child decided to make some little mini oven gloves for the Little Dark Star to use with her play kitchen (because she keeps stealing mine!). We have a huge stash of scrap material for this kind of thing. She used some microfibre fluffy tea towels I don’t really like to make the inner ‘padding’.

This is how they turned out. 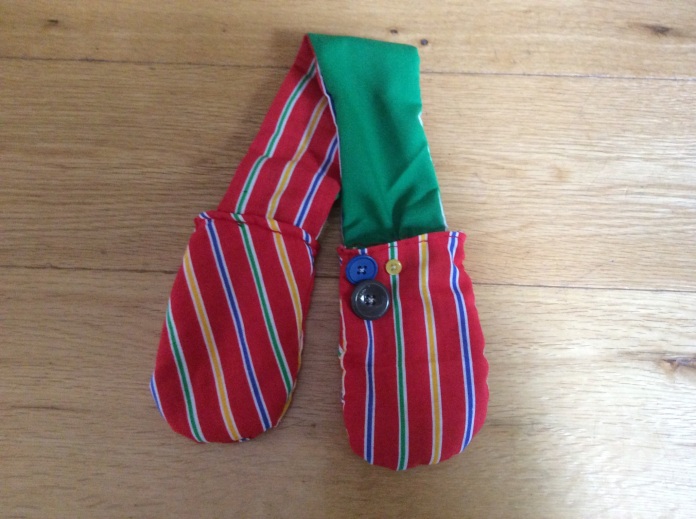 The Little Dark Star loves them and so do I. 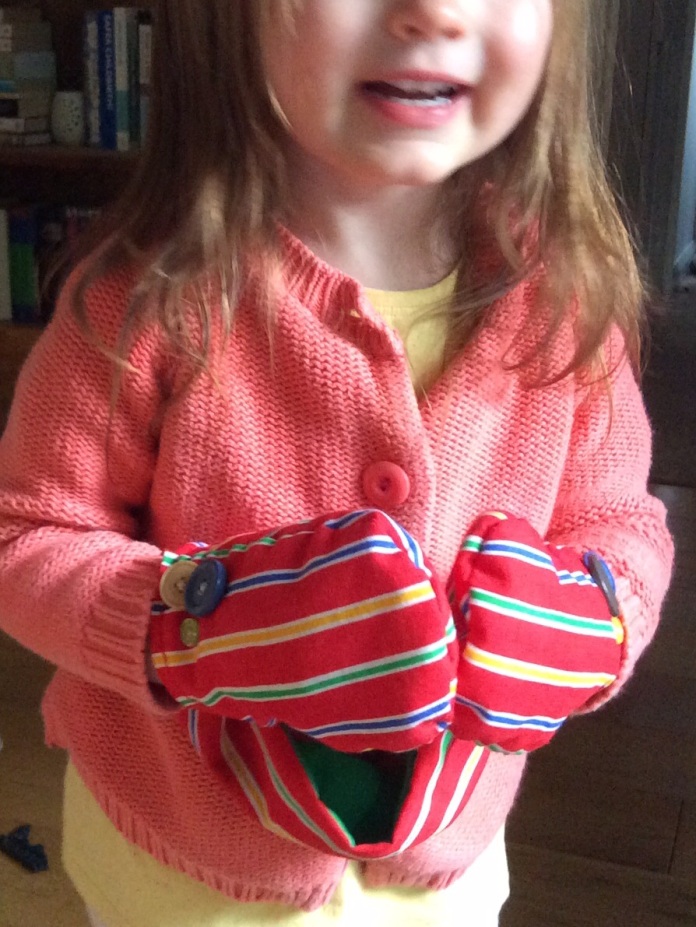